When you travel as much as I do and meet so many people from such different cultures and life situations, you are often blessed to meet people who completely stun you with what they are accomplishing for good in the world. As I head home from a trip to Uganda and South Sudan I am reflecting back on one such young man. His name is Michael. He is twenty-five and lives in Kwempe, a district of Kampala.

I first met Michael a year ago when we trained nearly 100 pastors and leaders to plant churches. It is all part of an effort at Northland Church to be a catalyst for 1 million new churches that are transforming their communities by making disciples who make a difference. We spend three days giving basic training in what we call Level 1. It includes Understanding the Bible, The Life of a Leader, and Planting Distributed Churches. Six months later we come back and do three more days on Basic Theology, Mentoring and Discipleship, and Reaching Muslims. We ask the participants to do all they can during that intervening six months to start at least two simple churches.

A simple church is any gathering of a small number of Christ followers that regularly meets for worship and service of others, has recognized leadership, and considers themselves to be a local expression of The Body of Christ. In other words it is as much like a first century church as we can make it be. We have been doing this long enough to know that on average, 2.5 such churches will get started for every person we train.

A few months after Level 1 Michael got to work planting his first simple church. He talked with some people he met, told them his story of coming to faith in Jesus and asked if they were interested enough to learn more and meet. They said they were and as a result a handful of people started meeting and came to faith in Christ. They became Michaels first church plant. The following week he met some more people and repeated the process, while at the same time continuing to guide the group from the previous week. The second group of people also became a new church in a new neighborhood. Michael continued this process every week. He would meet some new people, lead some of them to faith in Christ, have them begin to meet in a home or other location, disciple a leader or two in the group, and do it all over again the following week. In the course of the next seven months Michael started twenty-eight simple/house churches. That is on church a week for seven months!

When I asked Michael how he does it, he replied in a very shy way that he just talked to people. Asked them about their lives and he told them about his and Jesus and asked if they wanted to meet to talk some more. When I asked what he does about visiting all twenty-eight churches each week he said he doesn’t need to do that. He stays in touch with the people who have become the leaders and disciples them. Simple and amazing all at once.

Recently this young man has been approached by several people with years of ministry experience. They are asking him to disciple them so they can learn how to change their communities and the lives of people in positive ways.

Michael is not charismatic in the popular sense. He really is somewhat shy and reserved. When we taked about what God was doing through him he seemed almost embarrassed. Clearly he did not like being the center of attention. What a refreshing and challenging person he is.

When I made mention of Michael in a recent Facebook post, one person responded with, “Wow, makes me wonder what I have been doing for the past seven months”. In deed it does.

Michael appears below on the left with my good friend Gus Davies who is a great partner in the training we do. 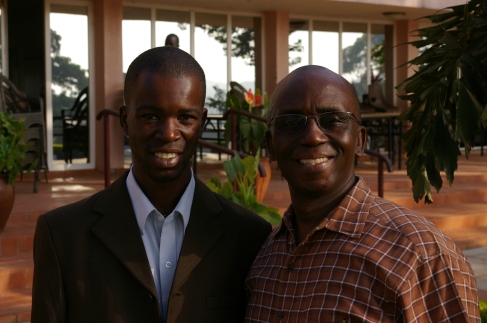