Here is a short video clip from a Q&A I did recently for Third Millenium Ministry. They have a goal of making Master Degree level theological education available for everyone on the planet for free. Not a bad goal. This clip answers the question, “What is realized eschatology?”

It is only a minute or so long. Hope you enjoy it.

Truth is increasingly becoming whatever you want it to be. Tolerance is becoming increasingly intolerant. Debate and discussion on issues in an effort to discover the truth, while respecting the other person, has been replaced with subjectivism coupled with personal attacks that shut down dialogue. In the midst of all this turmoil regarding what is truth and tolerance of everything, with the exception of people who think they are right, Christianity claims to not only stand on truth but that Jesus personified truth.

This worship service and sermon at Northland deals with the importance of truth, of us believing things the way they actually are.

The sermon begins at 35:32 but the whole service leading up to that is well worth the time. 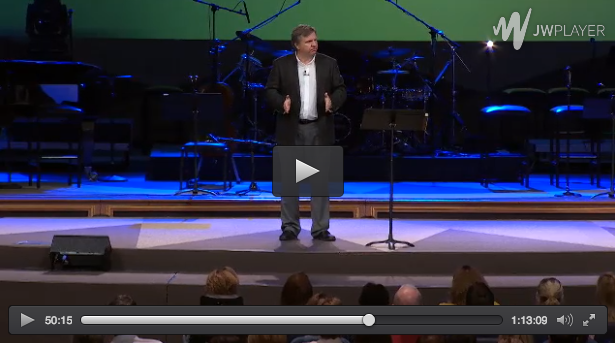 “if God is a loving God then why does He let bad things happen, especially to good people?” It is a question that has been asked countless times throughout history, by devout believers and angry atheists and everyone in between. It may in fact be the question most often asked about God. Why does God let bad things happen? When someone dies at a young age, when a storm kills seemingly at random, when a job is lost, a house destroyed, cancer diagnosed, a pregnancy is miscarried, the question gets asked in the midst of pain and tears, heartache and anger. END_OF_DOCUMENT_TOKEN_TO_BE_REPLACED

The Provocative God: Radical Things God Has Said and Done, is now available. You can order from this website and get the book for $10 plus shipping. Just click the link below.

I recently answered a series of questions for Third Millennium Ministries covering topics related to Biblical Theology. Here is the first of the videos to be posted.

It is a couple of minutes long. Hope you enjoy it and have your understanding of God expanded.

In the year of King Uzziah’s death I saw the Lord sitting on a throne, lofty and exalted, with the train of His robe filling the temple.

And one called out to another and said,

The whole earth is full of His glory.”

And the foundations of the thresholds trembled at the voice of him who called out, while the temple was filling with smoke.

Because I am a man of unclean lips,

And I live among a people of unclean lips;

For my eyes have seen the King, the LORD of hosts.”

What ever happened to a God who was bigger than our wildest imaginations, more grand than our greatest accomplishments, more perplexing than our deepest scientific theories? What ever happened to the God Isaiah trembled before, certain that he would literally be undone by the very presence of such overwhelming holiness and majesty? Whatever happened to that God of mystery, of power, the God before whom we were compelled to fall on our faces and declare; I am ruined? END_OF_DOCUMENT_TOKEN_TO_BE_REPLACED

About Me and This Blog